Large expanses of prairie occur on level to rolling interior plains where there is low precipitation (semi-arid), with summers usually hot and winters freezing cold.

Prairie vegetation is maintained by grazing, fire, drought and low temperatures. Although grasses dominate, lichens, mosses, forbs and low- to mid-size shrubs also comprise prairie vegetation. Taller shrubs and trees, mostly willows and poplars, including aspen and cottonwoods, are found in depressions and valleys where there is sufficient moisture and nutrients.

Prairie, like other temperate grasslands, is among the most productive and diverse of earth’s terrestrial ecosystems. 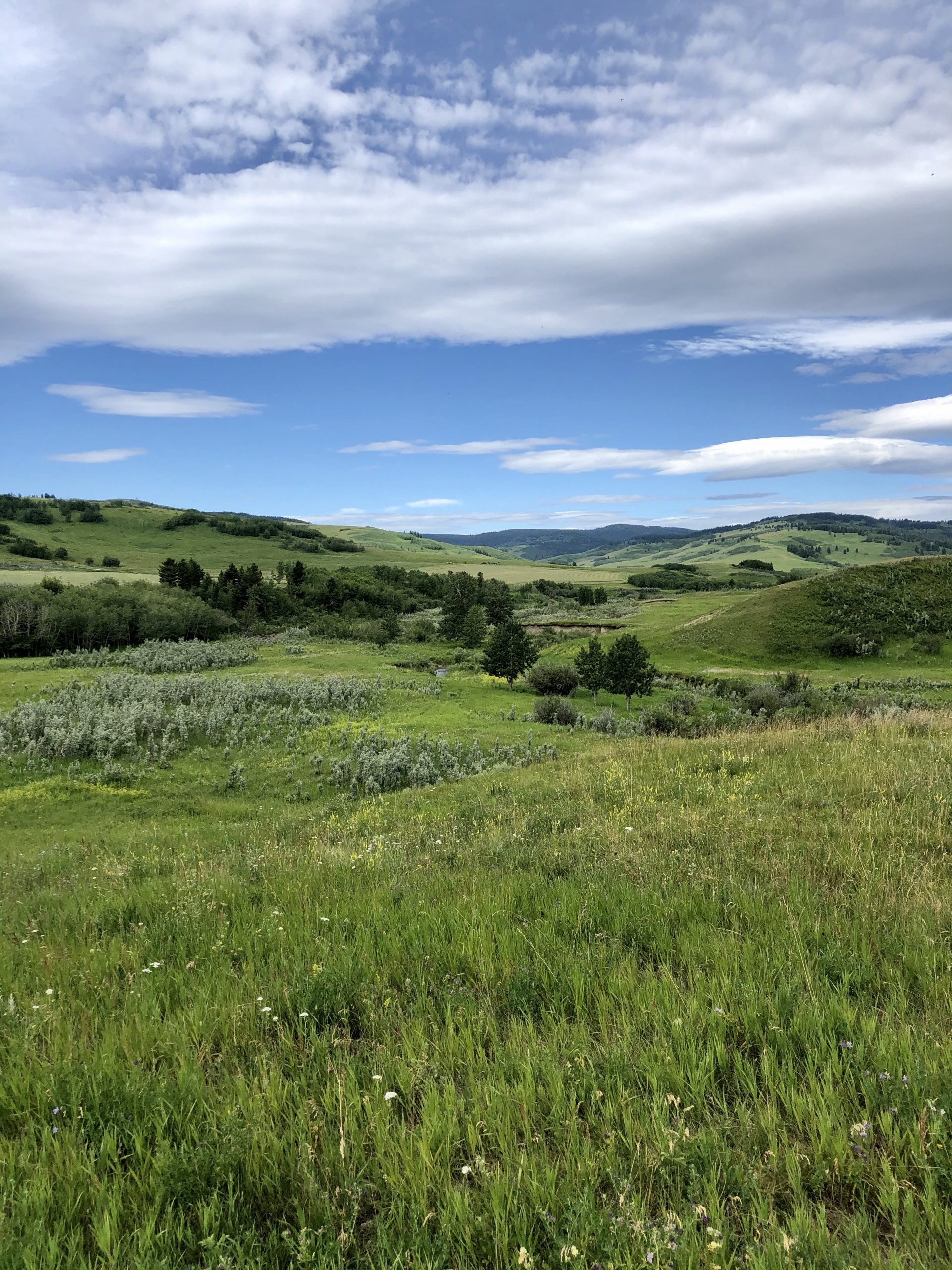 Hundreds of species of insects, birds, reptiles, amphibians and mammals make their home in prairie. Wildlife species living in prairie have adapted to a semi-arid, windy, open environment. Many animals, including elk, deer, coyote and bobcat, spend all or part of their lives in or near coulees and river valleys where they find shelter from summer’s heat and winter’s cold as well as cover for raising their young. Badgers, jackrabbits, ground squirrels, pocket gophers and other small mammals live in burrows to escape the extreme heat and cold. Migratory birds escape winter by flying south.  Reptiles (e.g. prairie rattlesnake and short-horned lizard) and amphibians (e.g. plains spadefoot and Great Plains toad) hibernate underground.

For millennia immense herds of bison roamed the grasslands, leaving large swaths of prairie grazed and trampled in their seasonal round. Grizzly bear and gray wolf, once abundant on the prairie, were the main predators of bison. Today, domestic livestock are the main grazers of prairie grasses. Some prairie wildlife (eg. Richardson’s ground squirrel, burrowing owl and McCowan’s longspur) are adapted to thrive in heavily grazed prairie, whereas other species (eg. Meadow vole, Sprague’s pipit, Baird’s sparrow) prefer lightly grazed prairie. Most wildlife frequents grasslands with moderate levels of grazing.

Riparian areas, or those areas adjacent to water sources, are an important component of prairie wildlife habitat. Not only do numerous species of waterfowl, shorebirds and other water birds rely on prairie wetlands for breeding habitat or temporary resting sites during migration, but many North American songbirds rely on riparian areas for all or part of their lifecycle. The same is true for prairie mammals and amphibians. 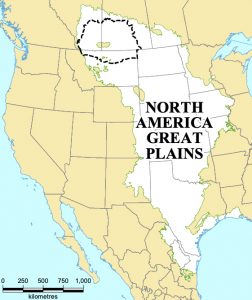 Prior to European settlement, the central grasslands of North America extended continuously from the prairie provinces of western Canada southward across the Great Plains of the mid-United States to central Mexico, occupying approximately 19% (4.1 million km2) of the continent (Gauthier et al. 2003) (Figure 1). Approximately 12% of Canada, 25% of the continental United States, and 28% of Mexico were native prairie.

Canada’s prairie region is south of a large arc extending from the lowlands of south-eastern Manitoba, north-westward through central Saskatchewan and Alberta and dipping steeply southward along the foothills of the Rocky Mountains. To the east and north of this arc is boreal forest and to the west is foothills forest. At the prairie fringe, woodlands intermingle with grasslands to form parkland.

Plants of the Canadian prairies are adapted to survive winter cold and severe summer moisture deficits with the resulting high frequency of fires.  They have co-evolved with grazers – large mammals such as bison, small mammals such as ground squirrels and insects such as grasshoppers.

Grasses, the predominant cover in prairie vegetation, have the following adaptations:

Growing points at or near the soil surface that are tucked in the crown of the plant. Here they are protected from dessication by wind, from severe cold, from damage by the hooves and teeth of large herbivores and from all but the hottest fires. If leaves are eaten or trampled, new ones grow again from the crown.

Small flowers in dense heads that are pollinated by wind.  Wind is a prevailing force in the prairies and easily can carry the abundance of pollen produced by grasses to fertilize related plants near or far.

Tough stems and leaves hardened with silica phytoliths (plant stones). Erect flower stalks enhance wind pollination. Erect leaves minimize surface area exposed to direct sunlight. Phytoliths in leaves may also be an adaptation to discourage grazing animals by wearing down tooth enamel. Herbivorous mammals such as horses, rabbits and rodents have evolved high-crowned molars that continue to grow through their lives to compensate for the abrasion from eating such gritty food – an example of co-evolution.

There are many more species of forbs than grasses in prairie but they seldom dominate plant communities because they are not as well adapted to the prairie environment.  A small proportion of prairie forbs and grasses are annuals; that is, they complete their life-cycle in one season.  Annual plants evade freezing and drought by persisting as seed through the winter, germinating in spring and completing growth and seed set by early summer before the soil dries out.

Most prairie forbs are perennials; that is, they persist for more than two growing seasons.  Perennial plants are usually better competitors than annual plants, especially under stable, resource-poor conditions. Some of their adaptations include root systems that increase access to water and nutrients (such as deep taproots, extensive rhizomes, and underground storage structures such as tubers, corms or bulbs), leaf adaptations that reduce water loss and herbivory (specialized hairs and thick leathery epidermis minimize water loss, narrow leaves and compound leaves reduce surface area exposed to evaporation), and unpalatable or toxic substances to dissuade grazers.

Most prairie shrubs and trees occur in river valleys, coulees, sand hills and in depressions where fresh water is close to the surface and there is shelter from winds that cause evaporative stress. Cottonwood, the predominant tree in prairie river valleys, has a deep taproot that draws on floodplain aquifers and also has the ability to shed outer branches during times of drought stress.  Silver sagebrush grows on sites where episodic runoff events provide more water and sediment than typical for well drained uplands. Aspen and many upland prairie shrubs have extensive underground stems (rhizomes) that not only help to secure water but also produce vegetative sprouts following fire or soil disturbance.  Some prairie shrubs have thorns or prickles to dissuade browsers.  As with prairie grasses and forbs, many shrubs have leaf adaptations to reduce water loss such as reduced surface area, hairs and thick epidermis.

Canada’s prairie is underlain by flat-lying sedimentary bedrock of Cretaceous age, scoured by the continental glaciers and over which was deposited till and sorted fluvial and lacustrine sediments as the ice receded 12,000 years ago. Landforms include glacial lake beds, morainal plains and hills, sand dunes, meltwater channels, and river valleys.

Soils developed under grassland vegetation are mainly Chernozems, characterized by a relatively thick, dark-coloured surface (A) horizon resulting from the accumulation and decomposition of organic matter derived from prairie plants. Some of the highest levels of carbon in the world are sequestered in intact prairie chernozems. Weakly developed soils known as Regosols are associated with sand dunes, active floodplains and steep slopes. Solonetzic soils that are hard when dry and sticky when wet develop in prairie areas where sodium salts occur close to the surface. Nutrient-poor soils known as Gleysols are associated with wetlands where decomposition is hindered by flooding. Luvisols develop under woodlands in parkland and are characterized by accumulation of clay in moist lower horizons.

Most people who live on the Canadian Prairies are concentrated in a few large cities. Rural communities are small and well-spaced throughout the region. A significant portion of the food produced in North America comes from the prairies, including cereal grains, oilseeds, and livestock. Irrigation, intensive farming practices and agricultural industries have helped to augment the productivity of the region and have contributed significantly to the regional economy, which provides for a high quality of life for its citizens. Ranching helps preserve and maintain native grasslands as livestock grazing mimics the ungulate grazers of the past. Prairie oil and gas reserves are also an important component of the regional and provincial economy.

While prairie is often characterized by its individual components, it is also influenced by natural processes. The prairie is a dynamic landscape modified over time by: Fire, Precipitation (i.e., flood, drought), Grazing, Wind

The range of variation of these processes is a critical component of prairie bio-diversity.

Precipitation (i.e. Flood & Drought)
Drought: The influence of drought on prairie ecosystems can be complex. An 11-year study in Minnesota found that diverse plant communities are more resistant to, and recover more fully from, major drought. Such findings raise concerns about resilience and maintenance of productivity on prairie lands that have been converted to less diverse crop land and tame pasture.
Flooding: Periodic floods deposit seeds and rich silts on river valley floors, and create ideal seedbed conditions for the rejuvenation of riparian cottonwood forests.

Grazing: Grazing helps keep a prairie in grass. Grass flourishes under the onslaught of ungulate teeth and prairie forbs respond by growing into bushier plants. Grazing prevents trees from overtaking the grasses, because tree seedlings are destroyed when their tips are eaten. Recent evidence using analysis of pollen from prairie lake sediments suggests grazing by bison checked aspen encroachment onto grasslands. The variability of grazing activity created by different animals at different times is a vital part of the ecosystem. While most birds and animals flourish under moderate grazing regimes, species such as ground squirrels and mountain plovers need heavily grazed areas to exist. Meadow voles and Le Conte’s sparrows are two species that thrive only in lightly grazed areas.