The Grassland Natural Region comprises approximately 30 million acres (14%) of Alberta, extending west to the Rocky Mountains and north to the southern edge of the Parkland Natural Region in central Alberta. The region is a flat-to-gently rolling plain with a few major hill systems. Most of the bedrock is covered with glacial till deposits. Some areas are blanketed by glacial lake sediments, sand dune fields and outwash plains. Badlands have developed where river valleys and their associated coulees and ravines are carved deeply into bedrock, especially along the Red Deer, South Saskatchewan and Milk rivers. The Milk River drainage contains the only exposures of igneous bedrock in the grasslands of western Canada. All other bedrock exposures are of sedimentary rocks.

Alberta’s grasslands are part of the Great Plains that stretch from the Gulf of Mexico, through the United States and into Canada’s prairie provinces.

There are four Natural Subregions within the Grassland Natural Region, each distinguished by differences in climate, soils and vegetation: Dry Mixedgrass, Mixedgrass, Northern Fescue, and Foothills Fescue.

Click on the coloured areas of the map to learn more… 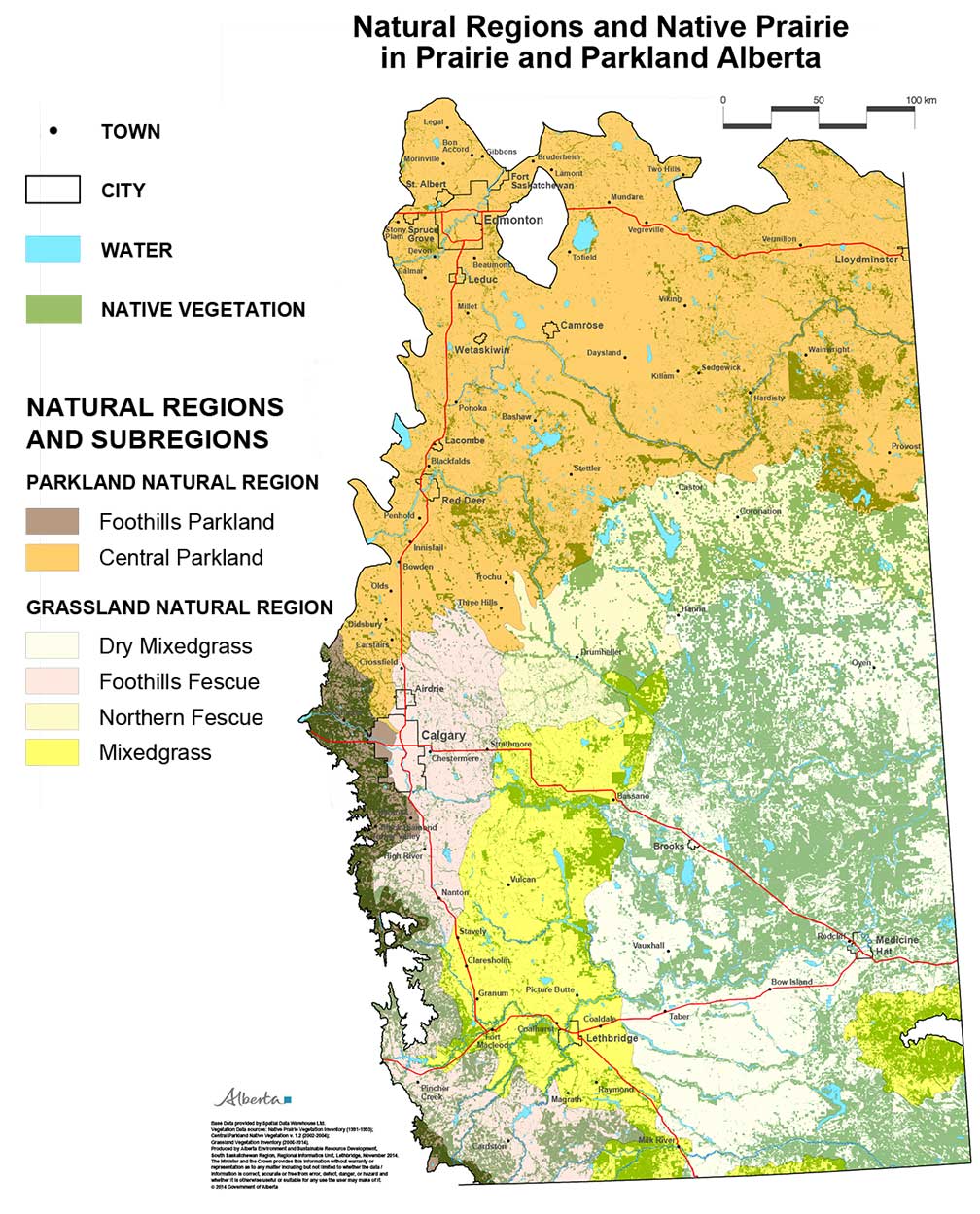 Wildlife: The numerous and very productive wetlands in the Central Parkland Natural Subregion are regarded as the “duck factory” of North America.

Geography: The predominant landform is a low-relief ground moraine. Elevations range from 600 metres above sea level near Empress to more than 1300 metres on the lower slopes of the Cypress Hills, Sweetgrass Hills and Milk River Ridge (average: 800 m).

Wildlife: highest diversity of animal species of the four grasslands Natural Subregions. Many species especially those of sand dune areas and the extreme southeast part of Alberta occur nowhere else in the province.

Area: 1.4 million ha (3.4 million acres) or approximately 14% of the total area of the Grasslands Natural Region.

Area: 1.5 million ha (3.7 million acres) or approximately 16% of the total area of the Grasslands Natural Region.

Soils: Dark Brown and Black Chernozems, with Brown Solonetz soils extending through the centre of the Subregion in a broad band.

Soils: Dark Brown. Black Chernozems occur on moister sites along the northern and western boundaries of this Subregion.

Geography: The predominant landforms are ground moraine and hummocky moraine. Elevations range from about 650 m near the Red Deer River to about 1450 m on the Cypress Hills (average: 975 m).

Wildlife: generally similar to but less diverse than that of the Dry Mixedgrass Natural Natural Subregion. Sandy areas are less common and the proportion of natural habitats is lower due to extensive agricultural development.